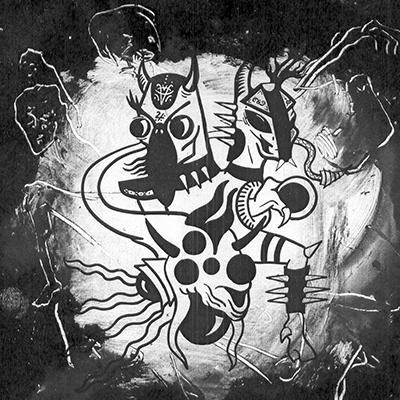 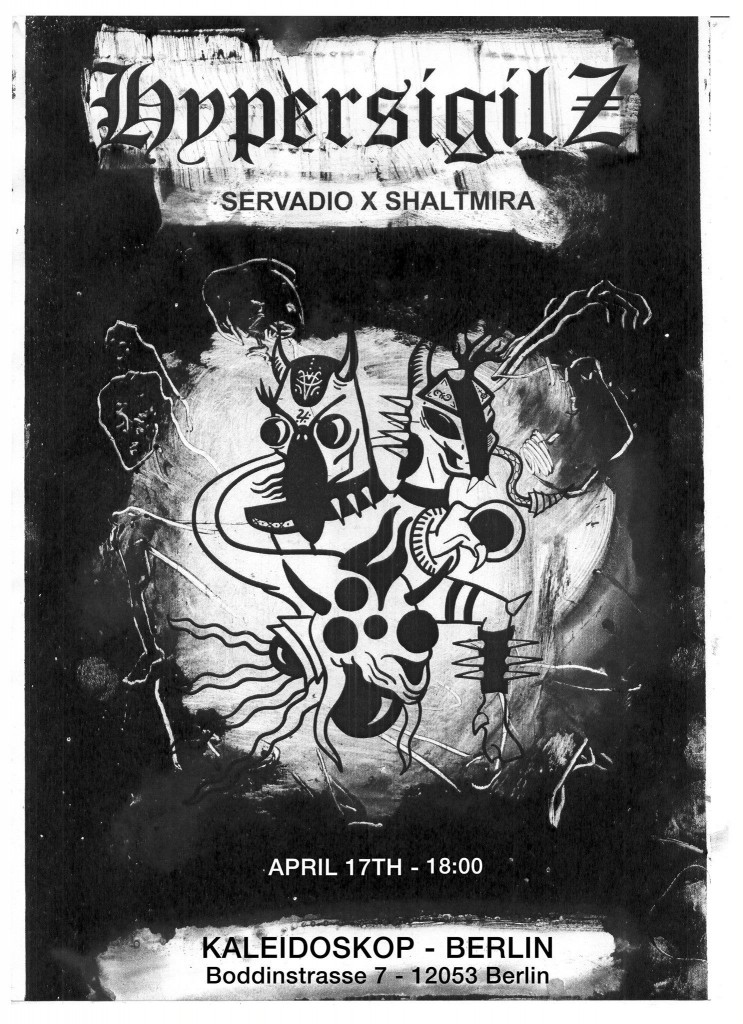 The exhibition ‘HypersigilZ’ explores the metaphysical world of hypersigils produced by Michele Servadio and Shaltmira. The sigils has been used for the creation of thought forms – beings or objects that are created through sheer spiritual or mental discipline alone, a symbolic representation of the artist’s desired outcome. A hypersigil is an extended work of art containing magical meaning and willpower, made unlike the traditional sigils with fixed meanings, whose creators made use of traditional lore passed down from generations. Servadio and Shaltmira create sigils entirely for themselves and devise their individual means of charging them with metaphysical power through a still image.

During the exhibition opening the two artists will make a collaborative performance in which Servadio will use Shaltmira’s skin as raw canvas to create a tattoo where sound becomes inserted deeply under the skin. The performance contains multiple layers of meaning that overlap with each other on many levels – from the very direct physical one to the highly intellectual one. The act of tattooing is influenced by the sound, while the sound is influenced by tattoo.

The work of Servadio finds communion in that most expressive, physical, totemic form, the human body. The most common interpretation of beauty, of idealism is contorted, dislocated and often, unceremoniously abandoned. Within Servadio’s monotypes, reductive, garish, often brutal figures twist, scavenge, smoke and dance, their sinewy frames smeared greasily across the page. As a tattoo artist, Servadio is layering image upon image ad infinitum, blurring the lines of comprehension, a sublime chaos of religious iconography, postmodernism and ancient mysticism.

Shaltmira is like the shaman holding the chaotic black mirror in face that somehow helps to build a bridge through the gaze. A bridge that connects between the darkest aspects of human psyche and the highest forms of consciousness. She is a warrior who is empowered by her thorough knowledge of these demons and spirits, for they have been described in ancient legends and myths of many cultures. She also widely uses archetypical imagery from the world’s more contemporary literature, giving them a new interpretation. The story, the narrative is very important for the artist, revealing all the multiple layers of meanings and inter-connections between the beings that she brings into the light.

The process of creating hypersigils turns into a mysteria. The audience is involved into the communication process of two independent creators who, in their turn, communicate with the ancient mythologies, magic cults, and spiritual practices to create a powerful ritual of stopping the time to face and win over our inner monsters.