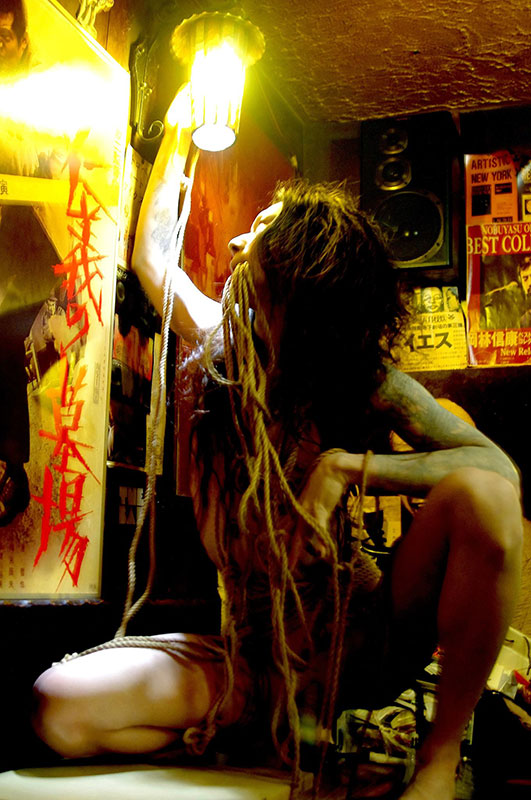 As a beginning of two weeks of Performances Videos and Pictures revolving around the theme of Bondage , Performance, S/M , Body Modification… we start with a performance and photography by CoCo Katsura .

-Out of the Womb- Going Up
:performance by CoCo Katsura human instrument in coraboration with Louis Fleischauer
and Christain tan ( Chello)

Born Tokyo, Japan
CoCo Katsura is a:
Japanease Rope Bondage Performer
Fire Performance ( with Dj or solo)
Body Suspension Performer
Choreographer
She has started to work as a Body Modification Performer In the year 2000 in Tokyo Underground scene. Her unique style is a mix of cult Japanease classic form and modern gothic decadence. CoCo Has performed over 100 stages across the world the past 10 years. Mainly in Japan, Holland, Germany, Finland, Englan, Greece, Belgium and France. Her intention towards her art is to reach other people hearts and thoughts by the usage of her body. CoCo is feat. a lot of different artists and trying to make beautiful space productions. Always CoCo’s performance has a taste of death…and nature. Death is most beautiful epic of life… and with nature.

On the last day of the show the 13/3/2015 Coco offers and introduction event into bondage and suspension practises and techniques.
50 € participation fee